Linen triangle historical tent is a perfect shelter from the 15th century sources. Fabric used in this model provides proper protection against rain and wind, because it has undergone anti-mold and anti-rain impregnation. This historical tent can hold up one or two persons.

This triangle tent is made of impregnated linen of 650 g/m2 density. The dimensions of our medieval soldier tent are: 3 m of length, 2 m of width, 2 m of height. This model’s construction consists of two vertical, 2 metres long double-poles and a double-part horizontal bar of 3 m length. The poles are connected in the middle with a rope of 8 mm of thickness. This triangle tent is attached to the ground with tent pegs.

The whole set consists of:
- the tent sheet
- two double bars of 2 m length
- vertical, two-part bar of 3 m length
- 21 m of a polypropylene rope of 8 mm thickness for binding the poles
- 10 tent pegs + 2 spare pegs
- a bag for the tent
- a bag for tent pegs
This triangle tent is simple in setting up and transportation. Its shape and size make it a perfect choice for one or two users.

The medieval soldier triangle tent will be perfect for soldier camping. Still, it can be used during reenactment events and other expeditions as well.

Under the influence of bad weather conditions (heavy rain for example), wet leather elements may taint the tent's fabric.
The leather used for strengthening fabric in places where there are pegs, entry, and guy ropes is in natural colour.

Due to the fact that our tents are sewn from 100%-natural fabrics, they are meant to be used occasionally. By “occasional use” we mean using the tent in a row of maximum 5 days, a couple times a season/a year, with drying the tent’s canvas after each usage. Despite anti-mold and anti-rain impregnation, when you use the tent for a prolonged time, mold spots might start to appear and the fabric might lose its anti-rain properties – especially in humid weather conditions (long and heavy rains, the lack of sun, high air humidity etc.). Therefore, the deterioration of tent’s condition due to prolonged usage cannot be treated as a ground for complaints. However, if you are interested in such usage of our tents, please contact us and we will offer you an alternative to our standard tent fabrics (e.g. a mixture of natural fabric with polyester, with higher endurance against dampness and mold).

One can find a triangle tent in 15th century iconography, e.g. in the collection called De Machinist by Paolo Santini. There is a scene presenting a medieval camp with this type of tent for medieval soldiers. This model will also be perfect choice for reenactors of Napoleonic Wars and American Civil War eras.

Another example of a triangle tent can be found on the painting by Charles Wilson Peal from 1781. It is titled Colonel Walter Stewart, 2nd Pennsylvania Regiment of the Continental Line and it presents an army camp with numerous tents in a triangular shape. The work can be found in Yale Center for British Art.

↪ made of impregnated linen (with waterproofing and anti-rotting impregnation);
↪ easy in setting up and transportation;
↪ based on historical sources;
↪ dedicated for one or two users.

Triangular tents of this type were extremely popular between 15th and 20th centuries. Depending on the needs of the user, they had various sizes but their shape and purpose remained unchanged. During the Independence War, soldiers’ tents were used by both sides - British and American. These historical tents could store around 6-8 soldiers. Some model, beside the entrance, had also a removable side wall. The triangular “Soldier” tent was also used during the Napoleonic Wars. 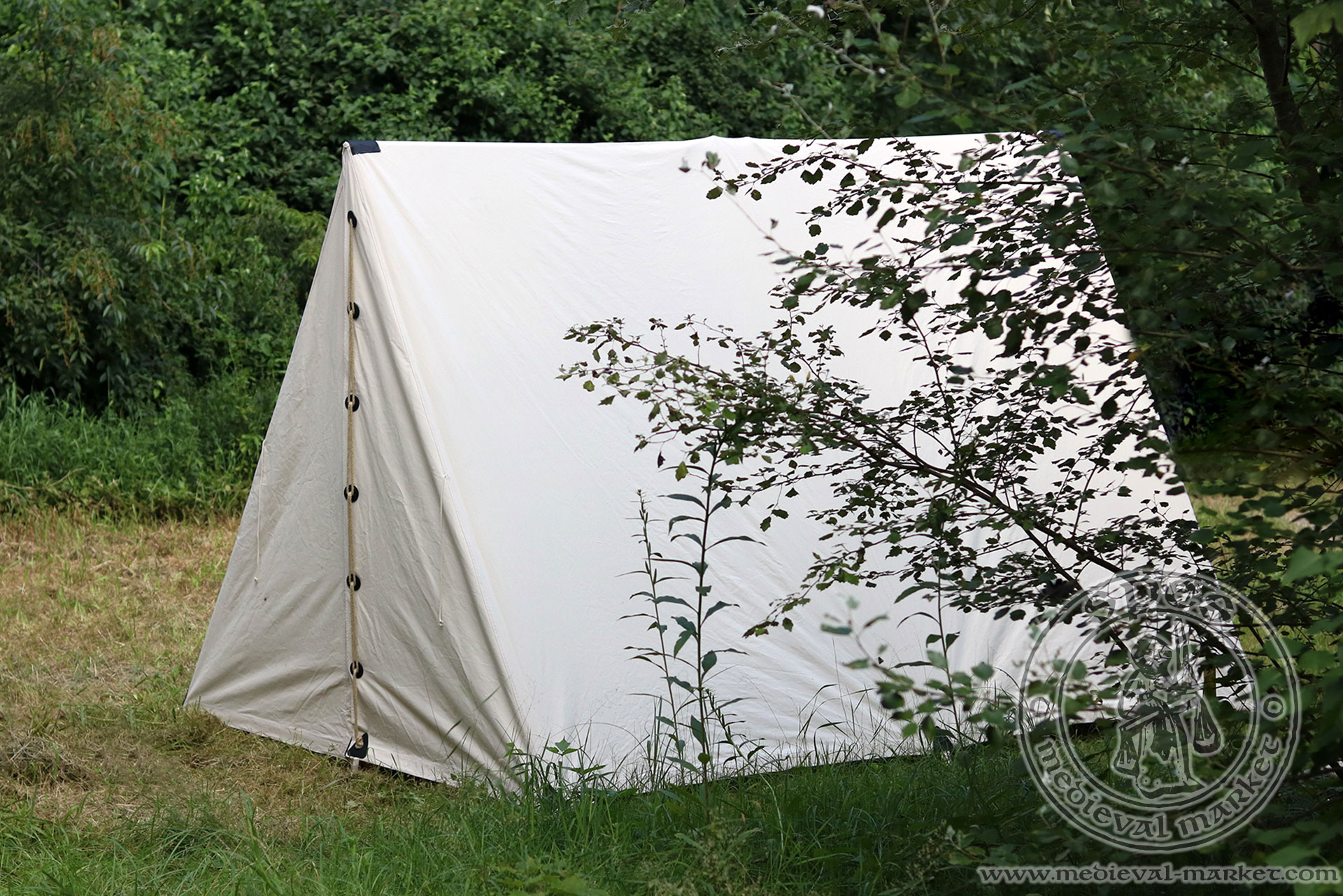 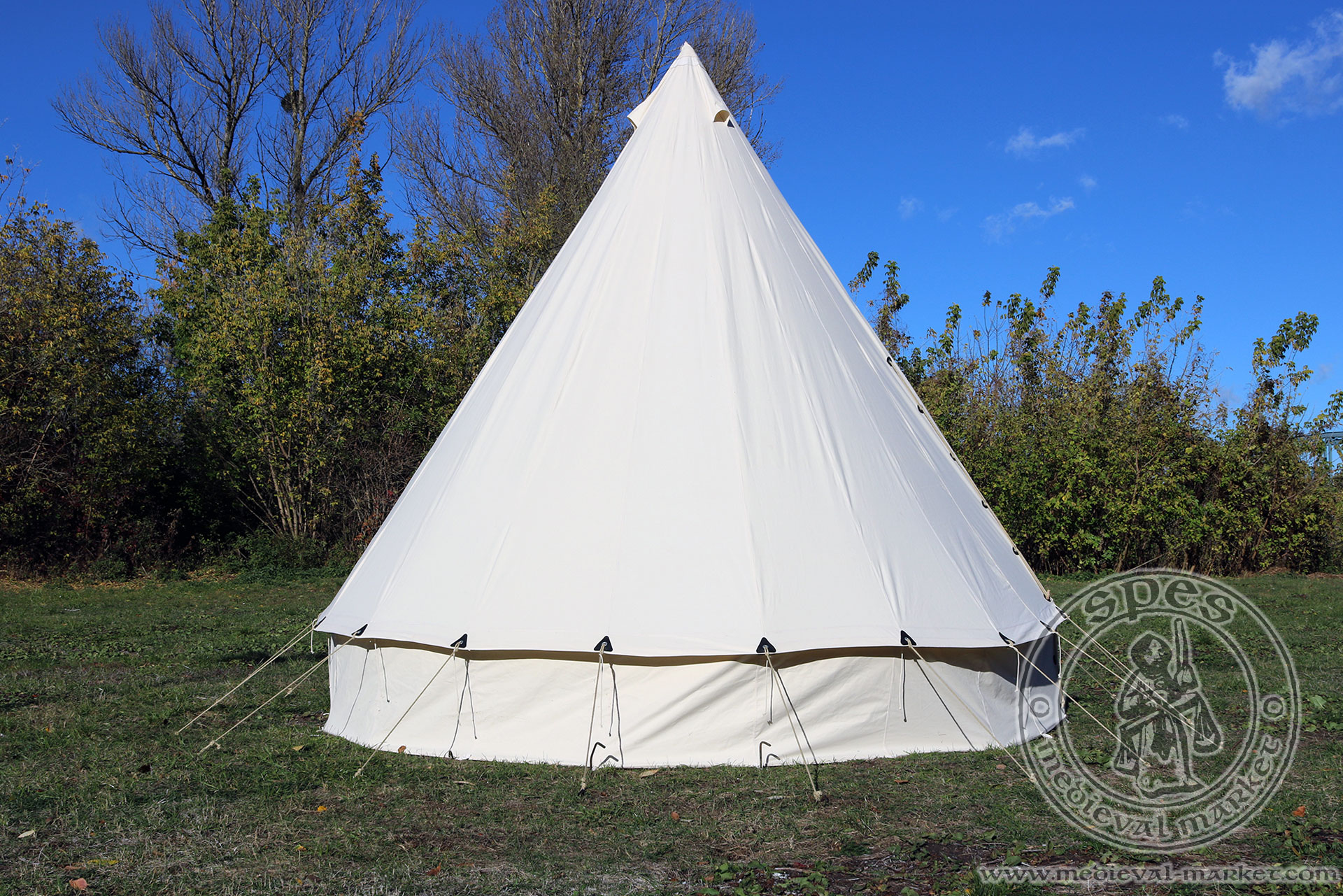 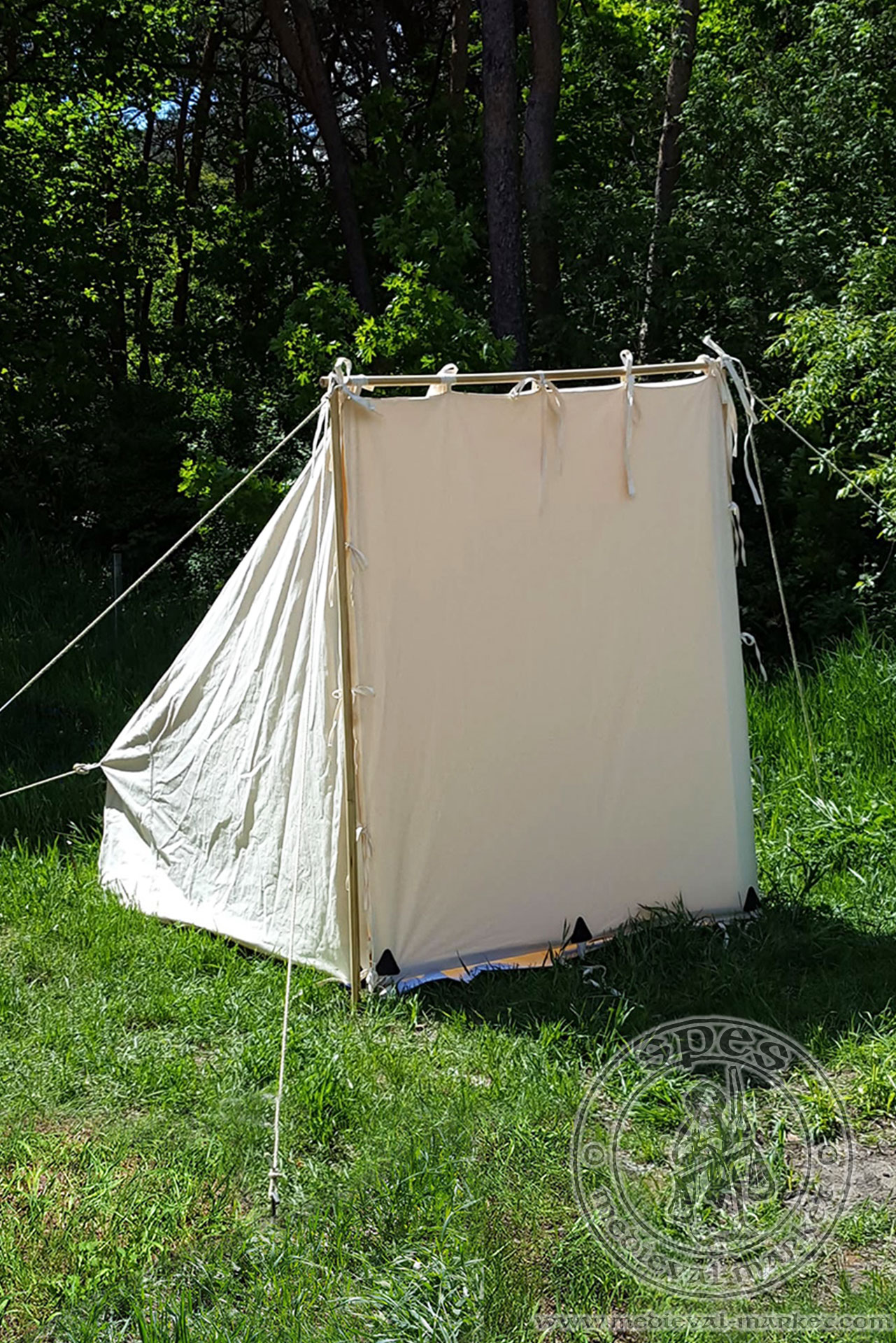 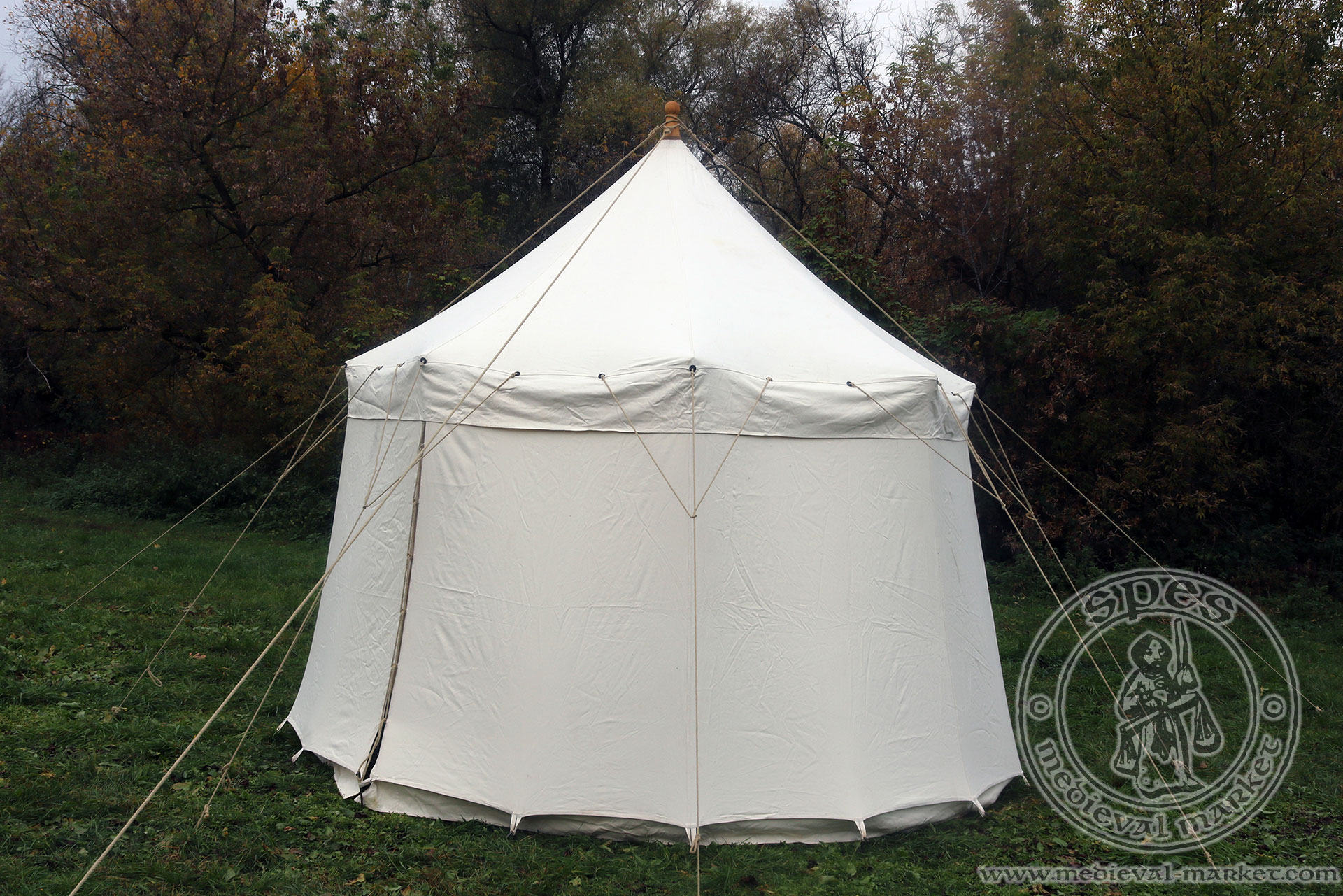 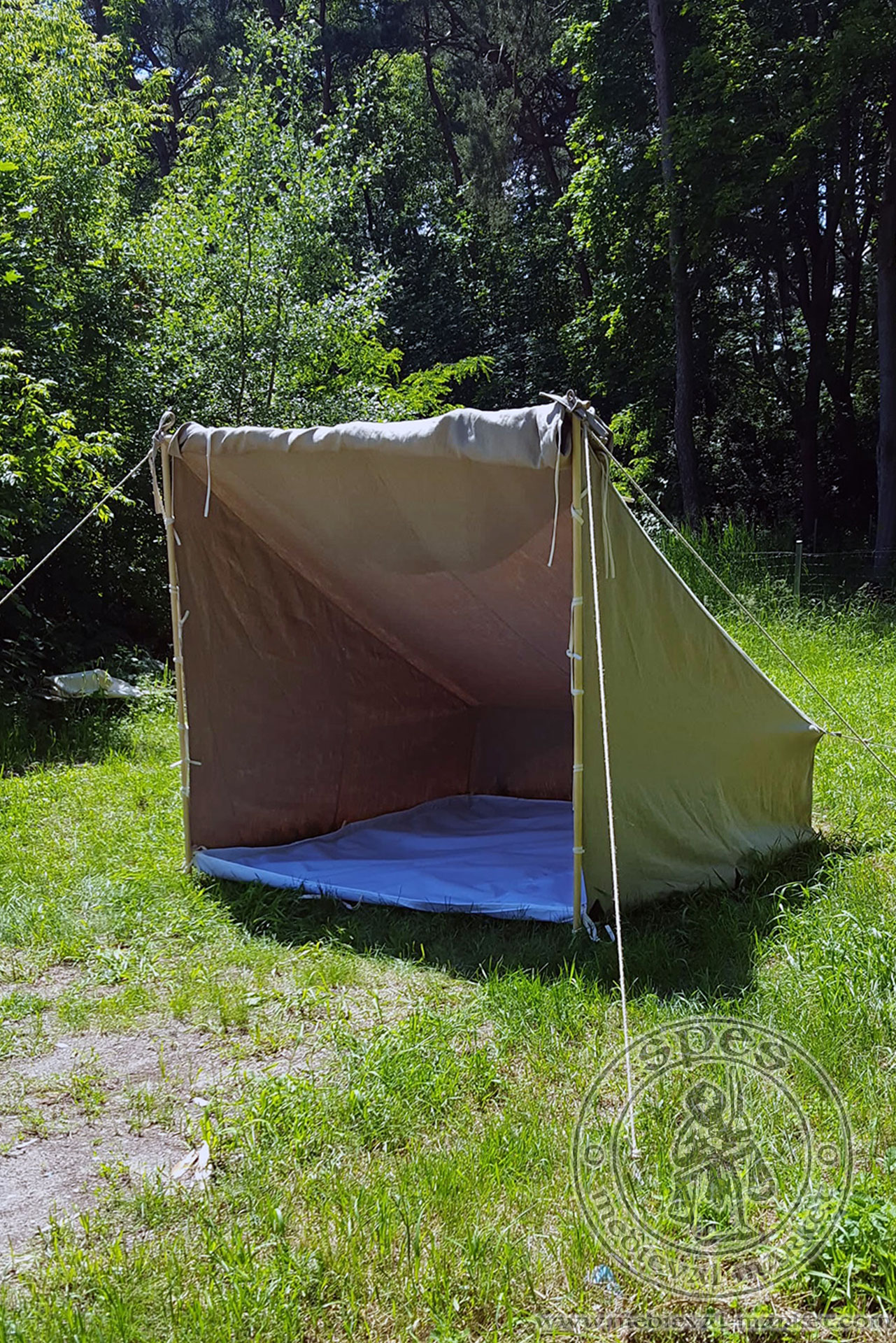