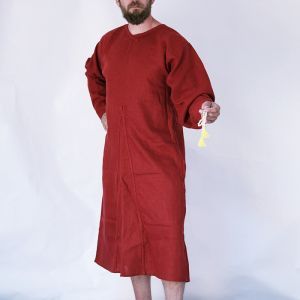 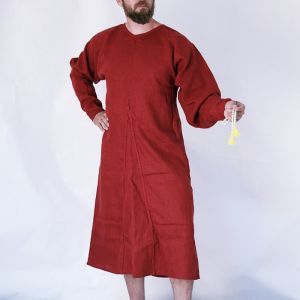 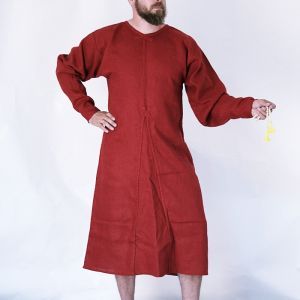 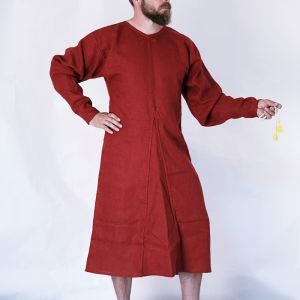 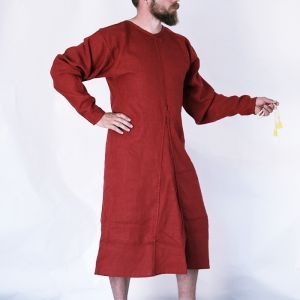 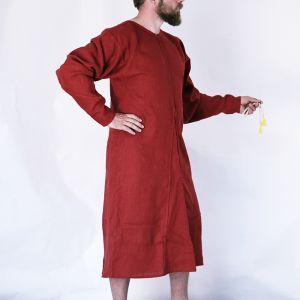 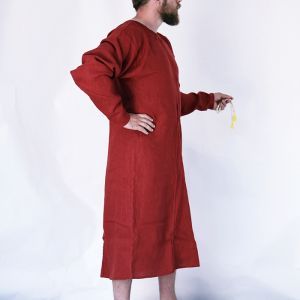 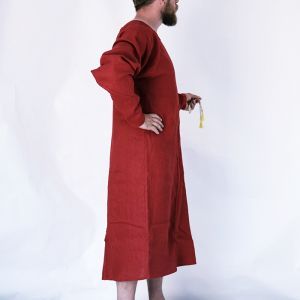 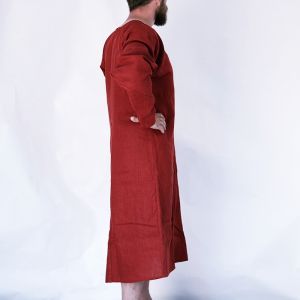 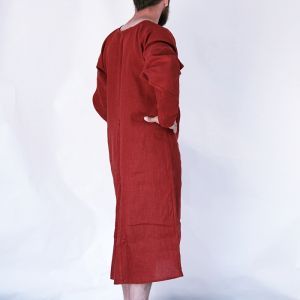 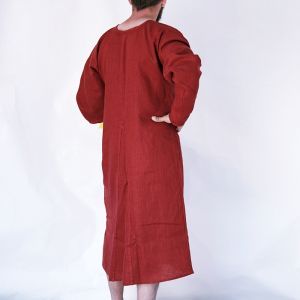 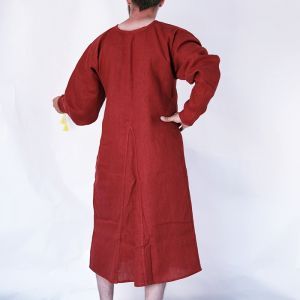 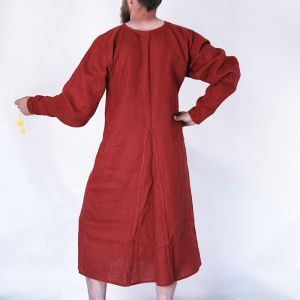 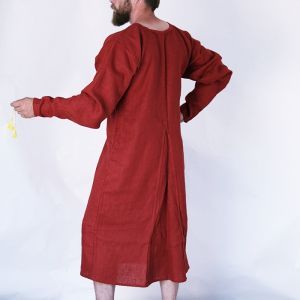 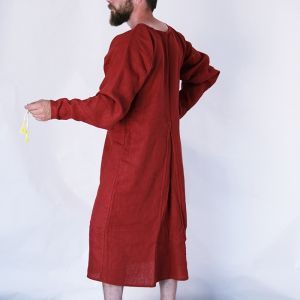 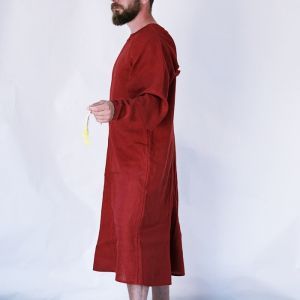 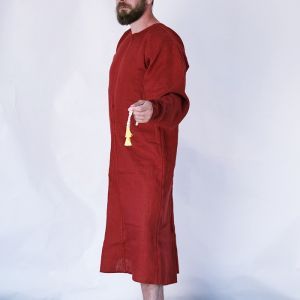 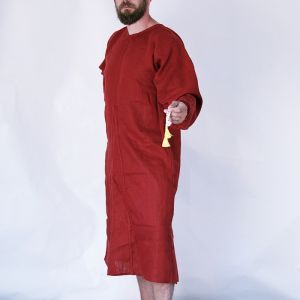 Medieval long shirt of this type, also called a tunic of Saint Louis, is an interesting example of medieval underwear. This medieval long sleeve shirt will perfectly work out as an underlayer of a historical costume.

Tunic of Saint Louis, originally stored in Notre-Dame, is made of high quality linen. This medieval men’s nightgown consists of a two-part torso (front and back), and sleeves. The sleeves of this medieval long shirt are loose, with unusual V-shaped seams on forearms.

Our tunic of Saint Louis has a slightly V-shaped collar, with a trim around the neck and gussets in a form of extra linen strap, just like in the original from Notre-Dame. Medieval men’s nightgown of this type, just like other underwear, is the first, basic element of a medieval costume. Medieval long shirt of Saint Louis will be a perfect choice for a reenactor looking for 13th century underwear.

Please remember to choose one of the colors available for a tunic of saint louis. You can check the colors here.

Our medieval long shirt is available in standard sizes: XS-XXL. With a surcharge of 20% you can order this medieval men’s nightgown in custom sizing. In order to choose the best size, please follow the chart below:

Please write down the chosen size in additional information box when you place the order.

Tunic of Saint Louis from Notre-Dame is available in three standards. You can order this medieval long sleeve shirt as machine sewn, hand sewn, or in mixed standard. More on the standards of sewing you can find in the pricing chart.

Our tunic of Saint Louis is based on a medieval long shirt worn by Louis IX the king of France. This medieval men’s nightgown is stored in the museum of Notre-Dame cathedral in Paris. You can notice the lack of one sleeve and blood spots on the fabric.

Medieval underwear, just like today, was an essential element of any clothing. It isolated the body from the outer layer of clothing, usually made of wool. Body linen was also the only element of clothing which was washed regularly. Usually for its production people used linen, but wealthier social classes wore silk. In the late medieval period, also cotton.
Medieval underwear for men consisted of a shirt (camisia) and braies (bracca), later also a suspender belt. Like every other part of clothing, these also changed over the years.
Men’s underwear from the 13th and 14th century consisted mostly of long linen braies reaching under the knees. On the other hand, in the 14th and 15h century braies reached the middle of the thigh. Later, braies were even shorter, without legs.
It is easy to notice that underwear was getting shorter and shorter over the years, especially braies. Primarily, it had a protective role - it worked as a cover against heat and cold.


Louis IX - the monarch of the Lord

The name of our medieval men’s nightgown derives from one of the most important French kings of the medieval period.
Louis IX ruled the country for 44 years. During this time he not only left his mark on the history of France, but also Europe. The king made peace between quarrelled families and nations, ending a long-term feud with English kings. He pushed through a number of essential changes, like various reforms: monetary, administrative, and judicial.
Louis IX was an extremely religious person. He lived a life similar to a monk, wore a hair shirt, practised asceticism, and supported beggar monasteries. His greatest dream was to retrieve the Holy Land from the hands of Muslims and protect the Kingdom of Jerusalem. To achieve this, the King organized two crusades, but both ended up as a failure. During the first one, he was taken prisoner. During the second one, the King died as a victim of an outbreak.
Saint Louis is remembered as the king of the earthly kings, patron of the arts (construction of the Sainte-Chapelle and calling of the Sorbonne), reformer, example of the monarch by the grace of God. He is the only canonized king of France.